It's not plagiarism; it's an *homage.*

1. Thanks for your great comments on the reading post. It's gratifying to see several of you are literate and appreciate the written word. While it's admittedly a small and wildly non-representative sample, it still makes me feel good.
2. I have three or four actual (non-linky) posts coming this week. Should be interesting (it is to me, at any rate). So keep an eye out tomorrow for the first.
3. Manders did this today; I haven't done one in a while, so here you go:
Currently/Just
Currently Reading: "The Tipping Point," Malcolm Gladwell. This is a pretty interesting little book, if you're into understanding sociological trends. I'm wondering how some of these ideas can be applied to church. Something to ponder.
Just Read: "Harry Potter and the Deathly Hallows," JK Rowling. Prepare your pitchforks, torches, and stoning-stones. One of the upcoming posts is a *gulp* positive review.
Currently Listening: "Illuminate," David Crowder Band. Thanks to the generous insistence (and copyright violation) of a friend, I have a lovely burned copy of an album I should have owned for years now.
Just Listened: "The Trumpet Child," Over the Rhine. Amazing album. If you like Over the Rhine, tinkly piano, sexy female vocals, allusions to Tom Waits, or just music in general, this one is well worth your time.
Currently Watching: "The Bronx is Burning," ESPN's eight-part miniseries about the 1977 Yankees' run to the World Series. The sports angle is cross-cut with the New York mayoral campaign and the hunt for the Son of Sam killer. The miniseries gives a really neat "You Are There" feeling, as it intercuts archival footage from that year with reinacted footage featuring a cast full of notable and recognizable character actors (including El Turturro).
Just Watched: "Marty." This Academy-Award-winning film from 1954 about a lonely, sensitive butcher was touching, if a bit short. Marty (who's not winning any Mr. Universe prizes) meets a girl who's not a "babe" by his friends' standards, and who's not "Italian" enough by his overbearing mother's standards. But he realizes that this girl is his shot at being happy and has to decide if he should take a leap with her, or wait for someone more "perfect" to come along. Good flick.
Currently Drinking: Orange juice and Sprite. Call it a "dry screwdriver"--or, if you're Baptist, call it "punch."
Just Drank: some A&W Root Beer last night, though Manders had the right idea with the IBC.
4. And I'll go one better. Ladies and gentlemen, I give you:
The PBB "On Notice" Board for 9/29/07!!! 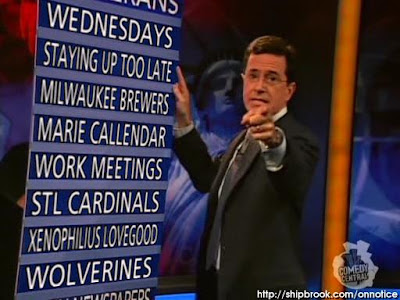